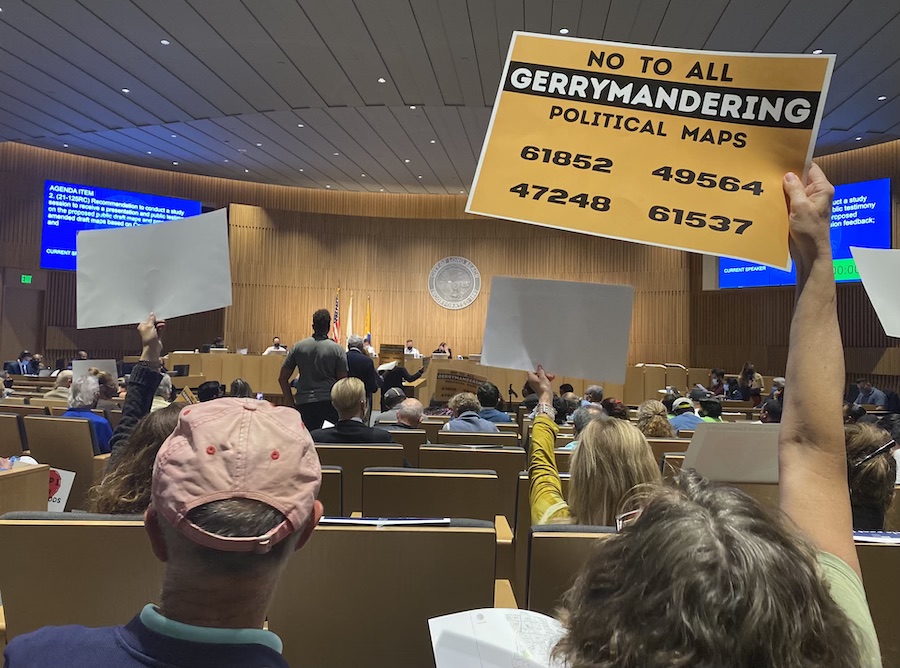 Vazquez Ramos, who is a retired Cal State Long Beach professor and CEO of the California-Mexico Studies Center, unleashed his frustration, calling the translator “inept” and adding that lack of quality translation is a burden felt by many in the city.

“For his purpose, to be the official translator, it was very, very incompetent,” Vazquez Ramos said in an interview Friday.

Vazquez Ramos and other members of the Latino community were at the meeting to protest a version of a proposed City Council map that could consolidate the Westside into one district, which they said would effectively segregate the Latino community’s political voice and likely see one, if not both, of the current Latino City Council members lose their seats. But Vazquez Ramos had lost confidence that their message was being properly conveyed in English.

As they spoke to Long Beach’s redistricting commission, one woman went as far as correcting the translator, telling the commission in Spanish that he “sort of” got her point across, but not exactly.

The translator was eventually switched out for another who had been translating the meeting for those watching remotely. Vazquez Ramos, who has done interpreting work himself, said interpretation is not always an exact science—with exceptions made for some differences in vocabulary—but the omission of whole sections of testimony is not OK.

He called it “shameful” that a city like Long Beach wouldn’t have better translation services and said that it needs to make the investments to have full-time translation for all communities as well public documents, like meeting agendas, translated to give those populations a chance to get involved.

Deputy City Manager Kevin Jackson said the translator who was replaced Wednesday typically does behind-the-scenes translations for those watching at home and those in the audience that request it. Jackson said he believes this was his first time doing public comment translation for the city.

Jackson said that he’s a competent translator but the city would be more mindful of who translates public comments in the future.

“We just need to prepare for that going forward so that we don’t put someone in a room that’s untested,” Jackson said.

Unlike the rest of the city’s public meetings, the Independent Redistricting Commission has translators on standby to assist Spanish, Khmer and Tagalog speakers for every meeting. However, Jackson said requests for the latter two have been rare. The commission has its own budget for translation services and Jackson said the city wanted to ensure that this redistricting process was as inclusive as possible.

Before that, no translation services were provided for nearly half of the year as the city worked to pivot to digital meetings during the pandemic.

City Clerk Monique De La Garza said that her office has a group of preferred translators that it requests for City Council and other meetings, but the city has had to ask its vendor not to send back certain translators because they were unable to keep up with the pace of speakers or accurately translate what they were trying to say.

“We have the four we like that we think do a very good job,” De La Garza said. “But it did take a while to get there.”

The ability for non-English-speaking residents to engage with the city through public meetings and other avenues has been a point of contention for community groups that have demanded more funding for the city’s Language Access Plan, only to see a fraction of the funding be approved year after year.

Long Beach has made steps to close these gaps, creating abilities for users of its GoLongBeach app to translate it into multiple languages, updating its phone menus when callers dial a city phone number and even working to categorize library books in Khmer.  However, things like notices that city crews are going to be working in city streets, which could result in cars being towed, have not all been translated into other languages.

The 2022 People’s Budget, a list of demands made by community advocate groups during the city’s budget process, called for $2.4 million to fully fund the program. The City Council approved budget this year included only $500,000 for the plan.

Vazquez Ramos said the communication disconnect is a big issue that can have lasting impacts not only on the current communities but on their children when they become adults because they see their parents unable to have a meaningful voice in how the city operates.

“They’re not learning that civic participation is as important an act as voting and that leads to a lot of problems in their communities,” Vazquez Ramos said.