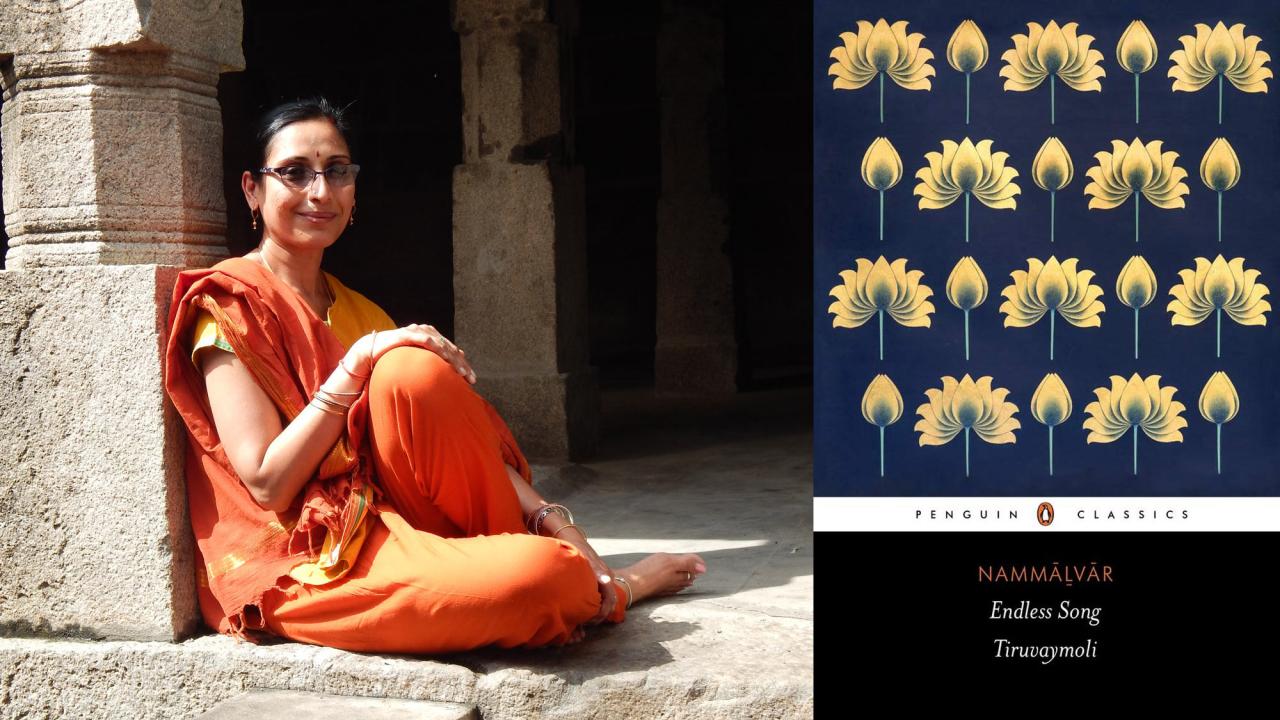 With [this volume] Venkatesan has clearly become the leading English interpreter of early Tamil Vaishnava lyric, and certainly one of the very few truly gifted translators of the language’s premodern riches. — Whitney Cox, associate professor of South Asian languages and civilizations, University of Chicago, writing in The New York Review of Books: “Lovesick for a God,” May 27, 2021

In one of India’s most revered ancient bhakti poem, Tiruvāymoḻi, an epic Tamil work from the ninth century, Nammāḻvār sings of his ecstatic devotion to God. Twelve centuries later, this important text sings in English, too, thanks to UC Davis Professor Archana Venkatesan’s translation.

So said the judges who earlier this month named her “monumental” work, Endless Song, as the winner of the 2021 Lucien Stryk Asian Translation Prize. The $6,000 award is from the American Literary Translators Association.

Venkatesan has a dual appointment in the departments of Religious Studies and Comparative Literature, and writes about her work on her website and blog, “Poetry Makes Worlds: On Tamil, Temples and Translations.”

In a post after her win, she wrote: “I am shocked, elated, humbled and honored by this recognition. It took a very long time to birth this book, to find an English to match the soaring heights of Nammāḻvār’s Tamil.”

“A very long time” started in 2007 for a project encompassing 1,102 interlinked verses described by the publisher as “a garland of words where each beginning is also an ending.” A challenge, yes, but a true labor of love for someone like Venkatesan who translates almost every day.

“This is a discipline I maintain,” she said in an interview with Dateline UC Davis for this books blog post. “It’s what keeps me grounded as it infuses beauty and magic into my every day. Usually, I translate a single verse or one short poem. I tinker with it until I feel that click, this intangible sense when the words make sense in English.

“For Endless Song, translating a verse would require reading not just the verse but the commentaries from over the centuries, so it was very slow, painstaking, but joyous work.”

A work of art

Venkatesan described the Tiruvāymoḻi as “wonderful, intoxicating poetry” and added: “My hope is always that more people will discover the wonders of Tamil literature.”

Endless Song, published in February 2020, can certainly help. Whitney Cox, associate professor of South Asian languages and civilizations at the University of Chicago, writing in The New York Review of Books, said Venkatesan’s translation allows readers to take in Nammālvār’s work in its entirety, as she goes beyond the theology to present his poetry as art.

Each knows what they know,
each finds a different path
Each has their god
each reaches his feet
Each of these gods lacks nothing,
everyone is fated
to find their way to the great lord
who’s always there.

The judges of the American Literary Translators Association said she had “crafted a translation that one can experience not only as a well-annotated, definitive work of scholarship, but also as a living, breathing work of contemporary poetry.”

The Lucien Stryk Asian Translation Prize, named after the American poet who translated Buddhist literature and Zen poetry, and first given in 2009, recognizes the importance of Asian translation for international literature and promotes the translation of Asian works into English.

Poetry is her anchor

Venkatesan officially joined the UC Davis faculty in 2007, the year she started her Tiruvāymoḻi translation, but she did not arrive on campus until 2008, after a research leave on fellowships from the National Endowment for the Humanities and the American Institute of Indian Studies.

She served as the religious studies chair from 2015 to 2018, took a one-year sabbatical, then served as chair again from 2019 to 2021. She is also affiliated with the Art History Program and the Graduate Group in Performance Studies. She was a Chancellor’s Fellow from 2014 to 2019.

She came to California from Madras, India, at age 18, studied two years at De Anza community college in Cupertino, then transferred to UC Berkeley where she earned a bachelor’s degree in English literature, and a master’s degree and doctorate in South Asian studies.

“My graduate work took me back to India, a place I knew, but yet had to relearn,” she says on her website. “Poetry remained my anchor through it all. I learned to translate and realized that it was the instrument to understand, perhaps even reconcile, my twin souls — one nurtured in India and another nourished in the U.S.”

She works primarily in early-medieval Tamil, translating from Tamil to English. “I also work with a commentarial language that is a mixture of Tamil and Sanskrit called Manipravala (literally, gems and coral),” she said.

Besides Endless Song, she has published A Hundred Measures of Time, her translation of Nammāḻvār’s 100-verse Tiruviruttam; and The Secret Garland, her translation of Āṇṭāḷ’s Tiruppāvai and Nācciyār Tirumoḻi, two of the most significant compositions by the ninth-century female poet and mystic Kōtai.

Venkatesan is working now as the director and co-editor of The Kampaṉ Project in which she and six others are translating the 12th-century Rāmāyaṇa from Tamil to English. She is translating Book 5, “Sundara Kāṇḍam” (Loveliness).

She is a member of the editorial board of the project sponsor, the Murty Classical Library of India, an imprint of Harvard University Press.

Another of her projects is “Poetry Makes Worlds,” on the annual Festival of Recitation (Adhyayanotsavam), supported by a fellowship from the Guggenheim Foundation (2018) and a Fulbright Flex Award (2017-19).

Additionally, she and three other scholars are studying the Nava Tirupati, a network of nine Vishnu temples along the Tamiraparani river. and extolled in Nammāḻvār’s poetry. “Our project,” she says on her website, “is a study of how temple networks are constituted, how these temples dialog with their built environment, and the very important business of making heaven on Earth.”