Get the latest Syracuse news delivered right to your inbox.
Subscribe to our newsletter here.

As soon as I clicked to press play on the new South Korean series “Squid Game,” I frowned at the English subtitles in the preview. The soldiers in the game greet the players saying “진심으로 환영합니다,” which the subtitles translate to “a hearty welcome.”

This translation isn’t entirely inaccurate, but “hearty” isn’t typically a word that would be used in day-to-day conversational English. The original audio would translate better to “I sincerely welcome you,” because the first word in the phrase “진심 (jin-shim),” means truth, insinuating that a word with a connotation to truth or sincerity would fit better.

In the Netflix series “Squid Game,” hundreds of contestants compete in six games they grew up playing. The contestants have one thing in common: they’re all knee-deep in crushing debt, hoping to win the prize money so they can pay it off. They only risk one thing in the process: their lives.

The latest entertainment piece from my home country has taken the rest of the world by storm, including Syracuse University’s campus. A few organizations, such as the Korean American Student Association (KASA) and African Student Union (ASU), held events where students were able to participate in the games featured in the drama series.

One of the most viral scenes from the first episode is when the first 456 contestants play a game introduced to English-speaking viewers as “Red Light, Green Light.”

An animatronic doll turns her back to the contestants and sings a song at varying speeds. The lyrics translate to “the hibiscus flower has bloomed,” and once she finishes singing the song, she turns around and scans the playground for contestants who are moving even an inch. Contestants who are seen moving by her mechanic eyes are then shot to death.

While I understand why the translated subtitles chose to name the game “Red Light, Green Light,” I felt that this translation sidelined the cultural significance of the game and its accompanying song in an attempt to be more well-received to an international audience.

The flower in reference in the song in the game, the hibiscus, is the national flower of South Korea and carries deep cultural significance. The flower is regarded as “a flower that blooms and blooms and never fades” in Korea, according to the Ministry of the Interior and Safety.

The hibiscus flower appears on my Korean passport and in the logo of the Supreme Court of Korea. Above all, the flower serves as a symbol of strength and resilience, especially after the Japanese colonialism period during and after World War II.

Given the meaning the flower holds to Korea, I wish the English subtitles had translated the song verbatim because the game has variations in several different countries. Global audiences would have recognized what game the contestants were playing regardless of whether the subtitles read “Red Light, Green Light.”

As a fluent Korean speaker, I understand where these criticisms arose from, but I don’t think the subtitles were inaccurate to the point where they would impede understanding of the dialogue and overall major plot details for those who do not understand Korean. 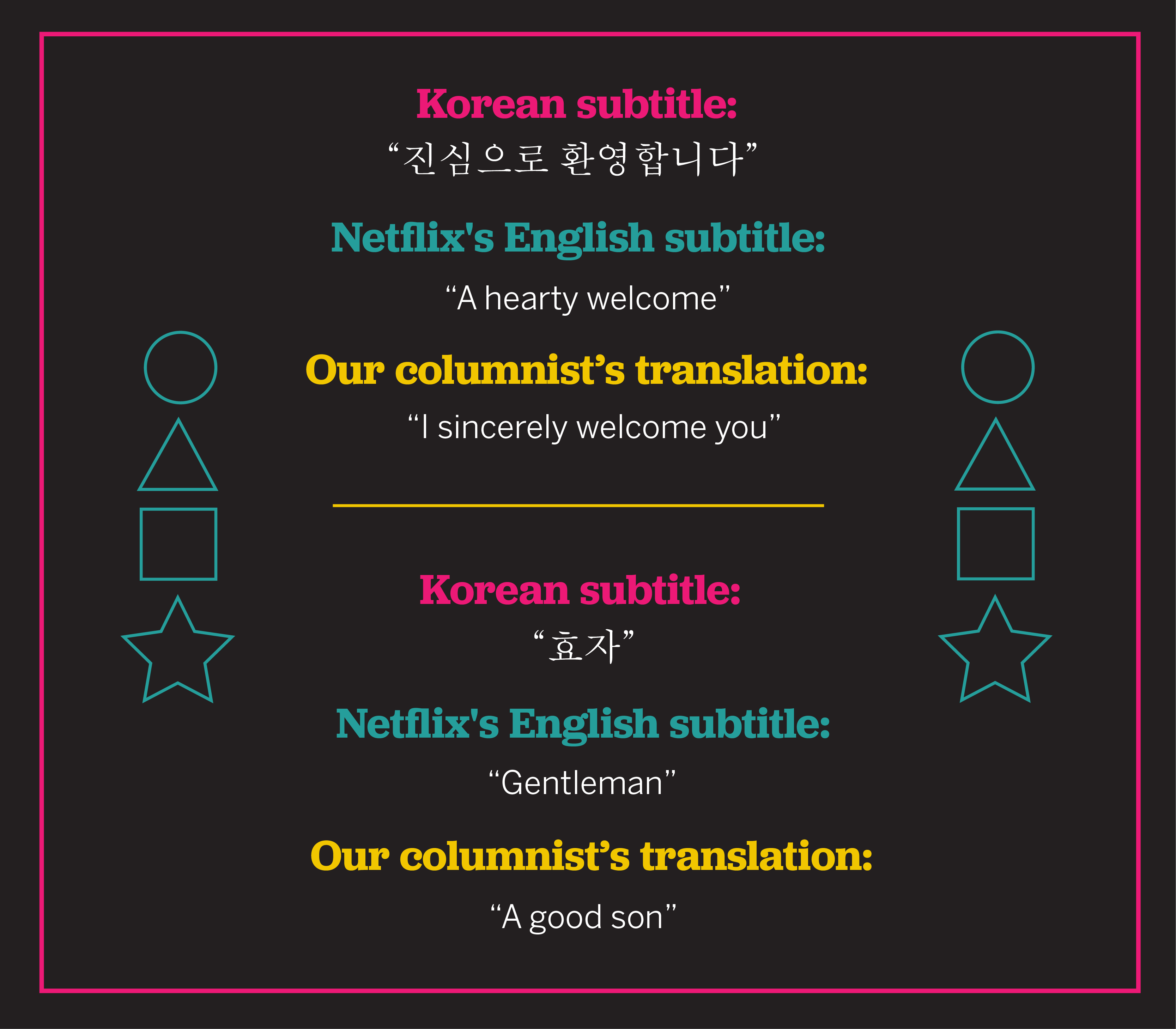 For example, Sang-woo is described as a “효자 (hyo-ja)” by one of his mother’s customers. The subtitles translate this word to a “gentleman,” but this word is actually an idiomatic phrase that means “a son who is good to his parents,” which does not have an English equivalent.

While the translation overshadows these cultural references, it does not greatly interfere with the audience’s ability to understand the plot when watching the series with English subtitles. They are, rather, very awkward and fail to translate into sentences actually used in conversational English.

The only subtitle that stood out to me as failing to convey the original dialogue’s meaning was when Gi-hun is first approached by the man in the suit to play a game of ddakji (paper tiles). The suited man knows all about Gi-hun’s background: his age, his family history and his current financial debacle.

Gi-hun responds according to the subtitles, “What business is that of yours?” The original dialogue, however, actually said, “Who are you to go and do a background check on me?” This part is relevant to the plot because shortly afterward, the administrators of the deadly games reveal that they know all of the contestants’ backgrounds.

Although the subtitle translations fall short, the viewers are still able to follow along and engage in the series because of the simplicity of the games. The true cinematographic value lies more in the tension created by these game scenes and less in the dialogue.