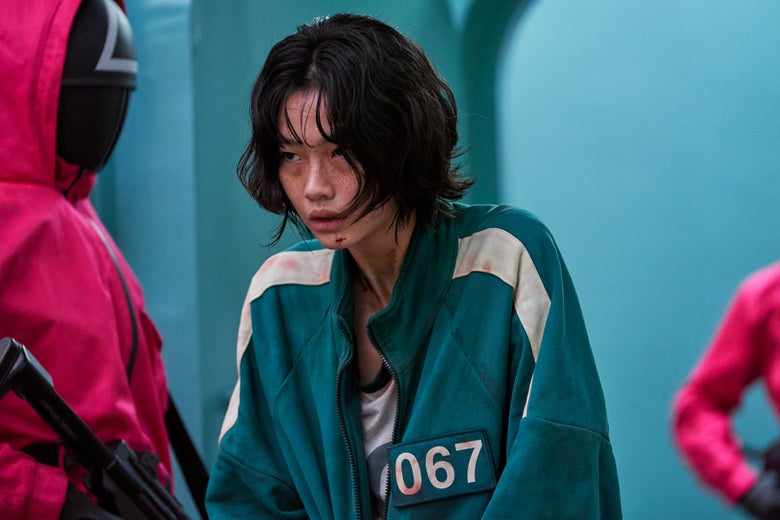 Squid Game, currently the No.1 show on Netflix and on track to be one of its biggest hits ever, is a chilling and addictive thriller about class and capitalism, where the hopeless and destitute play children’s games to the death for a chance at winning a windfall of cash that could change their lives forever. The show has taken the world by storm, and fans all over the world are obsessing over this psychological experiment, flooding the internet with memes. But bilingual Korean viewers are also using the internet to call out inaccuracies in the show’s subtitles that dramatically affect what non-Korean speakers are watching, using Reddit, Instagram, and Tik Tok to show the world just what is being lost in translation.

To a lifelong K-drama fan, this comes as no surprise. Netflix is notorious for their weak translations of Korean dramas—so much so that K-drama enthusiasts prefer the streaming service Viki, claiming that the translations are more accurate and nuanced even though they’re done by volunteers.

Nonetheless, these days, many popular K-dramas, like Squid Game, are released solely on Netflix, leaving viewers with no choice but to sit through awkward, watered-down dialogue. Netflix has been making a major investment in Korean-language content, producing over 80 original shows and announcing plans to spend nearly half a billion dollars in 2021 alone. But they’re falling short in the final stretch, botching translations in ways that can seriously compromise audiences’ understanding.

Translators are essentially gatekeepers of global communication and expression.

Class and income disparity are central to the plot in Squid Game. It’s why the story of Ali, a Pakistani immigrant who risks his life to save Gi-hyun in the very first game, is so gut-wrenchingly tragic. South Korea is one of the most homogenous countries in the world, with 99 percent of its population identifying as ethnically Korean. The other 1 percent includes foreigners who immigrate to Korea to work the fields and factories and send money back home to their families. However, their presence is not welcome by all, with nearly a third of South Koreans stating that they  “did not want foreigners or migrants as their neighbors” and over 60 percent believing that employers should hire Koreans first in times of high unemployment. Ali represents a small but significant population in Korea—one that, as Squid Game illustrates, is often overlooked, othered, and exploited.

As the games begin and the players become acquainted with one another, Ali calls his peers sajangnim, a title that is typically reserved for the big boss of a company or business. Netflix translates it as “sir,” minimizing the impact this self-declaration of inferiority has on the story and the rest of the characters. As the games progress and alliances are formed, Gi-hyun and Sang-woo’s growing discomfort become apparent as Ali continues to refer to them as his boss. At one point they tell him that neither of them are bosses, and to stop calling them by that name.

The best of movies, TV, books, music, and more, delivered to your inbox.

That’s how Sang-woo and Ali come to the conclusion that Ali should call Sang-woo hyung—older brother—a title used among close friends. Instead, the translation simply has Ali calling him “Sang-woo.” Calling Sang Woo hyung signifies a new relationship, one based on equality, friendship, and brotherhood, which makes Sang-woo’s ultimate betrayal that much more of a shock. (Ali’s final cry of hyung is simply heartbreaking.) Sang-woo’s desperate scramble to lie and cheat for money, even if being the boss means getting blood on his hands, illustrates the pitfalls of capitalism—which Netflix’s translation subtly but significantly deemphasizes.

Translators are essentially gatekeepers of global communication and expression. However, in film, realistically it’s just not possible to translate everything without losing the audience’s interest. Darcy Parquet, who composed the English subtitles for Bong Joon-ho’s Parasite, said in a lecture that “compromise is inevitable in subtitle translation. It’s quite common that you have to end up choosing actually a slightly worse translation that is more concise, that is easier to read, and which keeps the audience in the film rather than giving them something that is a little bit too much to process as they are watching the film. Subtitle translation can be difficult for perfectionist personalities.”

Squid Game’s translation may not convey the full significance of Ali calling Sang-woo hyung, but the audience can still understand that their relationship was evolving into friendship based on their on-screen chemistry. The same can’t be said about the inaccurate translation of sajangnim, especially when simply using boss instead of sir would have conveyed the subtext without debasing the original message and basically dumbing down the story.

Another important trope that gets lost in translation is the meaning behind the title of Episode 6: Gganbu—which, to Netflix, doesn’t even warrant a translation at all. The mysterious, terminally ill Player One calls his closest ally, Gi-hyun, gganbu, explaining that it means the friend in your neighborhood who you share your marbles and play games with. (The translation omits his next sentence entirely: “There’s no yours or mine.”) In essence, a gganbu is a child’s ride or die in game-land. The significance of this word comes full circle in the final moments of the last episode when, in another nebulous twist, Player One’s true identity is revealed.

Netflix has become a global content creator, with two of the platform’s ten biggest shows worldwide in languages other than English. (It’s safe to say that Squid Game will make it three.) Although Netflix has been transparent about the unexpected acclaim Squid Game has garnered, the company has also made showcasing underrepresented communities a part of its brand—and with great power comes great responsibility. There is a growing interest in stories by and about Black, Indigenous, or People of Color characters. But if proper attention and care isn’t going into the preservation and expression of the nuances of language and meaning, then whose story are we watching?