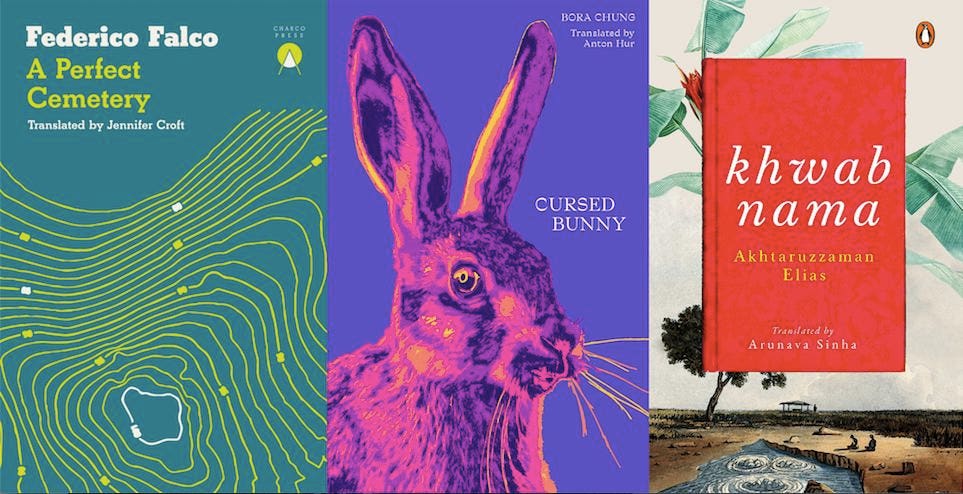 For National Translation Month, I interviewed three freelance translators who work in various languages: Jennifer Croft, who translates from Polish, Ukrainian and Argentine Spanish, Anton Hur, who translates in Korean and English, and Arunava Sinha, who translates in Bengali and English.* They discussed what makes a good translation, translator royalties, receiving credit on book covers, and issues within the publishing related to the treatment of translators. See part one on their education in languages, how they get work as translators, and how they approach their translating work.

What makes a good translation

Asked what makes for a good translation, the translators had varying definitions. For Sinha, a good translation “leaves the reader with the same affect, the same possibilities, as the original work does. It achieves fidelity in terms of meaning, voice, music, sound, rhythm, silence, smoothness (or the lack of it), and several other parameters. It is, in short, the same book, in a different language, not domesticated into culture of the language into which is translated, but standing as a work that both belongs and does not belong to it.” Sinha praised Anthea Bell’s translations of the Asterix comics, Ann Goldstein’s translations of Elena Ferranto and Alessandro Baricco, Daniel Hahn’s translations of José Eduardo Agualusa, Srinath Perur’s translation of Vivek Shanbhag, and Jerry Pinto’s translation of Sachin Kundalkar.s

Croft, who prefers “translations with strong styles,” such as Damion Searls’ translations of Norwegian writer Jon Fosse, said she likes “when the translator takes liberties with the text, but in order for it to work, it has to be a good match. Otherwise it’s like casting Meryl Streep in a Mad Max movie. It’s jarring, and the situation isn’t good for either the translator or the author. A translation is always going to be a different book from the original, but you want it to be different in a good way, in a way that complements the original and even enhances it somehow. Not in a way that flattens it, tries to ‘correct’ it, or just talks over it because it lacks that ability to listen closely.”

Hur said that “Korean academics and journalists have this weird idea that good translations are those where translators are as ‘invisible’ as possible, and this attitude has enabled some truly flat and unreadably tedious prose in translations created by soulless linguistics nerds and professor-wannabes. I think a translation that actually sounds like someone is a good translation. A recent great example is No Presents Please by Jayant Kaikini and translated by Tejaswini Niranjana (Catapult, Tilted Axis Press). The prose is deceptively simple but there is a lot of subtle glossing and evocative underpainting going on. And all the people, including the narrator, sound like people.” As for how to achieve this ideal, Hur said, “The new voice has to be a combination of the author, yourself, and the two different literary traditions you are working in if you want the voice of the translation to work.”

The business of translation

Hur said sometimes he’s paid a flat fee, and in other cases he gets royalties or an advance on royalties, and sometimes a combination of all three. Croft said she’s always paid a fee, and has received royalties for every title except Flights, and “had to fight very hard to receive them” for another Tokarzcuk translation, The Books of Jacob, which her agent helped to secure. Sinha is usually paid royalties, and an advance against royalty payments, but no translation fees, with Indian publishers. When dealing with other countries, sometimes he’s paid a fee, and sometimes royalties, depending on whether the book has already been published in India and the publisher in another country is buying the rights from the publisher in India.

While all the translators I interviewed relish their work, they expressed dismay at the treatment translators sometimes receive within the publishing industry. Hur said, “Rightsholders on the Korean side often treat translators like dirt, using rude and unprofessional language as well as demanding unrealistic terms in the pitching process. There are Korean publishers I flat out refuse to work with at this point because of how unprofessional they are. On the English side, you come across racist publishers who have never or almost never published an Asian translation or a translation by a non-white translator—to them, translated literature is European literature. It’s demoralizing to be a person of color in any industry, and it’s no different in publishing.”

Croft wrote recently in The Guardian that translators don’t always receive royalties (she didn’t for the U.S. translation of Flights) and that “a surprising number of publishers do not credit translators on the covers of their books.” Croft argued that being transparent about who the translator is on covers is an “urgent” issue, writing, “What tends to encourage a reader to pick up an unfamiliar book is the thrilling feeling that they are about to embark upon an interesting journey with a qualified guide. In the case of translation, they get two for the price of one[.]”

Asked what their dream translation project would be, Sinha said, “I would like to translate a monumental graphic novel, as iconic as, say, Maus, into another language. Every night I go to bed with the hope a Bengali language publisher will decide to publish such a graphic novel in Bengali and ask me to translate it.” For Hur, a dream project would be “to participate in a big group project that takes years to finish, like the new Proust translation from Penguin.” Croft said she “would love to continue in the direction of creative collaboration, like with Federico Falco, and potentially co-write a book. I think the more interaction there is between translator and writer, the more interesting the end result could be.”

*Hur is an acquaintance.