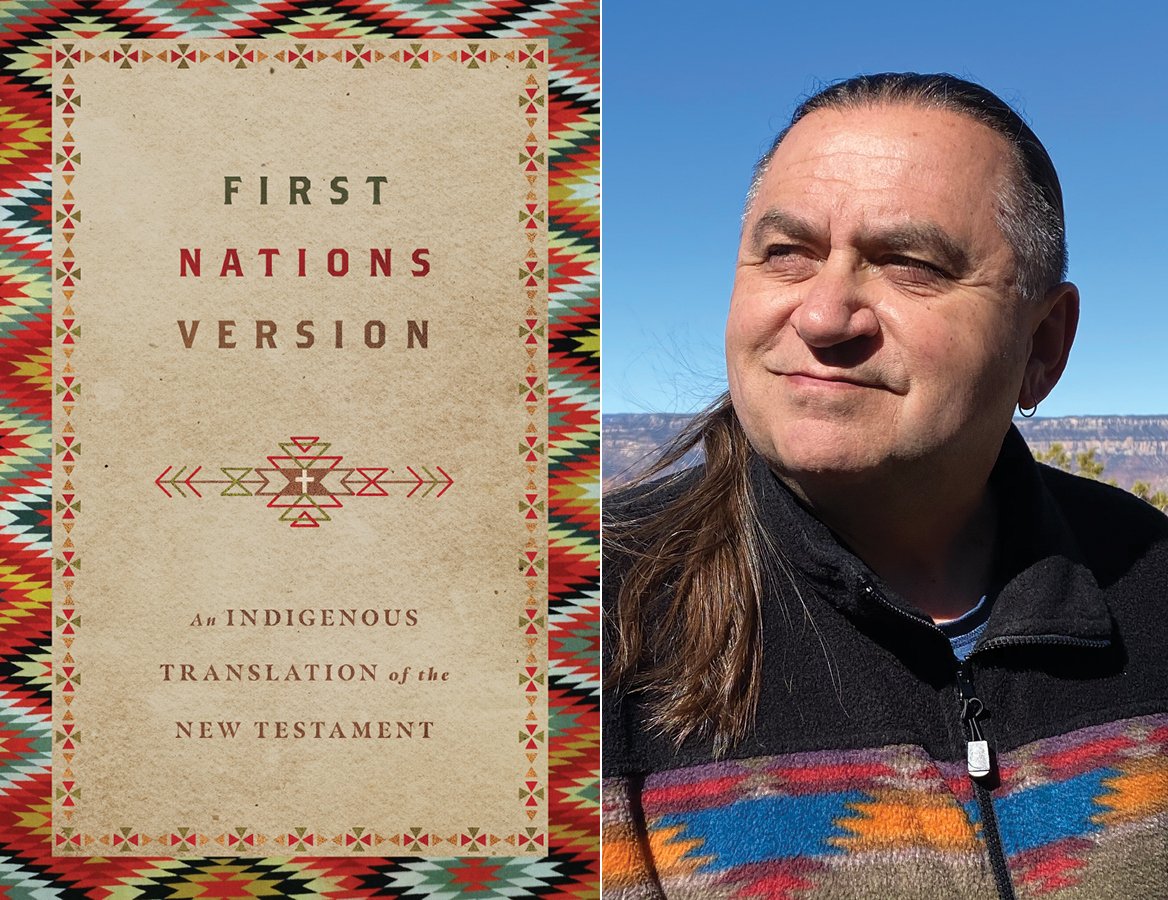 (RNS) — It’s a Bible verse familiar to many Christians — and even to many non-Christians who have seen John 3:16 on billboards and T-shirts or scrawled across eye black under football players’ helmets.

But Terry Wildman hopes the new translation published Tuesday (Aug. 31) by InterVarsity Press, “First Nations Version: An Indigenous Translation of the New Testament,” will help Christians and Indigenous peoples read it again in a fresh way.

“The Great Spirit loves this world of human beings so deeply he gave us his Son — the only Son who fully represents him. All who trust in him and his way will not come to a bad end, but will have the life of the world to come that never fades away, full of beauty and harmony,” reads the First Nations Version of the verse.

In the First Nations Version, “eternal life,” a concept unfamiliar in Native American cultures, becomes “the life of the world to come that never fades away, full of beauty and harmony.” The Greek word “cosmos,” usually translated in English as “the world,” had to be reconsidered, too: It doesn’t mean the planet Earth but how the world works and how creation lives and functions together, said Wildman, the lead translator and project manager of the First Nations Version.

They’re phrases that resonated with Wildman, changing the way he read the Bible even as he translated it for Native American readers.

RELATED: US churches reckon with traumatic legacy of Native schools

The idea for an Indigenous Bible translation first came to Wildman nearly 20 years ago in the storeroom of the church he pastored on the Hopi Reservation in Arizona.

Wildman, who is Ojibwe and Yaqui, was excited to find a Hopi translation of the New Testament in storage. He wanted to hear how that beloved Scripture sounded in Hopi, how it translated back into English.

But, he said, while many Hopi elders still speak their native language and children now are learning it in schools, he couldn’t find anyone able to read it. That is true for many Native American nations, he added, noting that at the same time Christian missionaries were translating the Bible into Native languages, they were also working with the boarding schools in the United States and Canada that punished students for speaking those languages.

Wildman, a licensed local pastor in the United Methodist Church, has been working on translating the Bible into words and concepts familiar to many Native Americans ever since.

He first began experimenting by rewording Scripture passages he was using in a prison ministry, giving them more of a “Native traditional sound,” he said — a sound he’d learned by being around Native elders and reading books written in a more traditional style of English by Native Americans like Oglala Lakota spiritual leader Black Elk.

He and his wife, Darlene, who have a music ministry called RainSong, also recorded readings of those passages over music in an album called “The Great Story from the Sacred Book.” It won a Native American Music Award in 2008 for best spoken-word album.

Wildman was encouraged by the reactions he received as he shared his rewordings across the country at tribal centers, Native American-led churches and powwows.

Many Native people asked what Bible he was reading from.

Young people have told him it sounds like one of their elders telling them a story. Elders have said it resonates with how they heard traditional stories from their parents and grandparents.

As others encouraged him to turn his rewordings into a full translation of the Bible, Wildman published a children’s book retelling the Christmas story, “Birth of the Chosen One,” and a harmonization of the four Gospels called “When the Great Spirit Walked among Us.”

Then, on April Fool’s Day 2015, he heard from the CEO of OneBook Canada, who suggested the Bible translation organization fund his work. The offer wasn’t a prank, he said, it was “confirmation from Creator that this was something he wanted.”

“We have all of these translations for that purpose to reach another generation, to reach a particular people group. But we had never had one for our Native people that has actually been translated into English.”

Wildman began by forming a translation council to guide the process, gathering men and women, young and old, from different Native cultures and church backgrounds. They started with a list of nearly 200 keywords Wycliffe Bible Translators said must be translated properly to get a good translation of Scripture.

With that foundation, Wildman got to work, sending drafts to the council for feedback. He looked up the original Greek text of the New Testament. He checked to see how other English translations rendered tricky passages. He consulted Dave Ohlson, a former Wycliffe translator who helped found OneBook Canada, part of the Wycliffe Global Alliance.

The Indigenous translation uses names for God common in many Native cultures, including “Great Spirit” or “Creator.” Names of biblical figures echo their original meanings in Greek and Hebrew: Jesus becomes “Creator Sets Free” and Abraham, “Father of Many Nations.”

“We believe it’s very important that the Gospel be kind of decolonized and told in a Native way, but being accurate to the meaning of the original language and understanding that it’s a different culture,” Wildman said.

Over the years, he and his council have published editions of the Gospel of Luke and Ephesians and a book called “Walking the Good Road” that included the four Gospels alongside Acts and Ephesians.

Native InterVarsity, where Wildman serves as director of spiritual growth and leadership, has distributed earlier editions of the First Nations Version at conferences and used the Indigenous translation in its Bible studies for Native college students for several years.

Megan Murdock Krischke, national director of Native InterVarsity, said students have been more engaged with the translation, hearing the Bible in a way they’re used to stories being told.

“Even though it’s still English, it feels like it’s made by us for us. This is a version of Scripture that is for Native people, and it’s indigenized. You’re not having to kind of sort through the ways other cultures talk about faith and spirituality,” said Krischke, who is Wyandotte and Cherokee.

“It’s one less barrier between Native people and being able to follow Jesus.”

Earlier this month, The Jesus Film Project also released a collection of short animated films called “Retelling the Good Story,” bringing to life the stories of Jesus, or Creator Sets Free, feeding the 5,000 and walking on water from the First Nations Version.

Wildman said the response from Native peoples and ministries to the First Nations Version has exceeded any expectations he had when he first began rewording Bible passages.

He hopes it can help break down barriers between Native and non-Native peoples, too. He pointed out the suspicion and misinformation many white Christians have passed down for generations, believing Native Americans worship the devil and their cultures are evil when they share a belief in a Creator, he said.

“We hope that this will help non-Native people be more interested in our Native people — maybe the history, understanding the need for further reconciliation and things like that,” Wildman said.

“We hope that this will be part of creating a conversation that will help that process.”