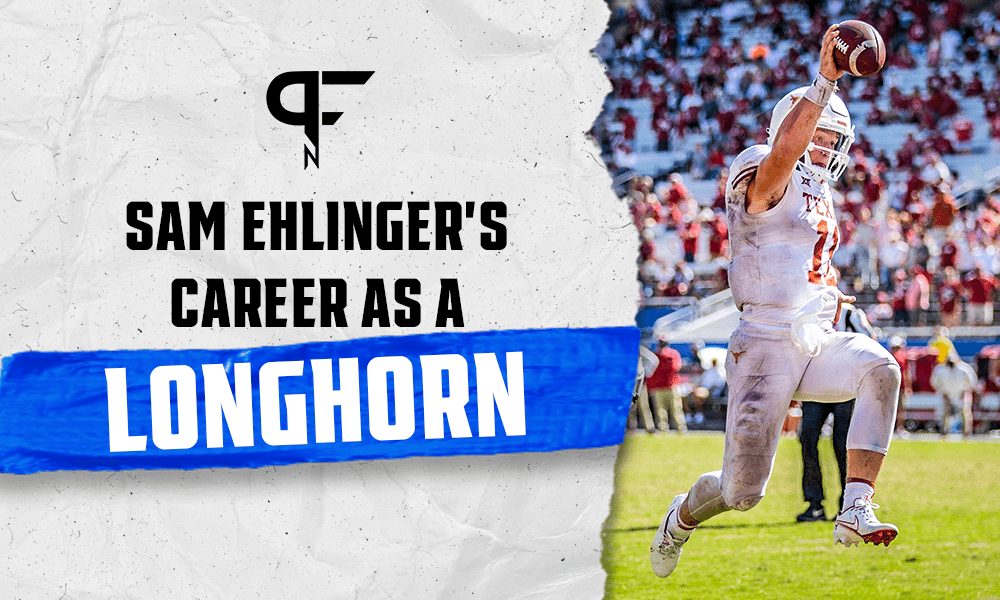 The Indianapolis Colts are in a bit of a quarterback quandary after an injury to Carson Wentz. An update to Wentz’s timeline looks refreshing, but he is still expected to be out at least the next four weeks. That news leaves the Colts with two inexperienced signal-callers and a journeyman player in their QB room. Still, when Sam Ehlinger hears his name called by head coach Frank Reich, you can bet the former Texas QB will be up for the challenge.

Ehlinger started for four seasons at the University of Texas. In those four seasons, he threw for 11,436 career passing yards and 94 touchdowns. He played in 46 career games as a Longhorn, starting 43 with 27 victories to his credit.

A dual-threat by nature, Ehlinger also ran for another 1,907 yards and 33 touchdowns on the ground.

Extending past the game of football, Ehlinger won the 2020 Jason Witten Collegiate Man of the Year Award. Furthermore, he landed on the final lists for the William V. Campbell Trophy, Wuerffel Trophy, and Bobby Bowden Trophy. Each aforementioned accolade is given out to players for differing statuses of high character. That makes them essentially awards made for players like Ehlinger.

From Texas to Indianapolis

Despite all of that, Ehlinger fell to the sixth round of the 2021 NFL Draft. By all accounts, he was expected to be a long-term developmental prospect with added value on the sidelines due to his character and football IQ. Just as Pro Football Network’s Tony Pauline explained in his scouting report on Ehlinger:

“Ehlinger is a high-character prospect and was very productive at the college level, but he lacks physical skills for the NFL. He struggled all week during Senior Bowl practices, and while he may never start in the NFL, Ehlinger may be worth keeping on the roster for the extra set of eyes on the sideline.”

What Ehlinger may lack in physical tools, he more than makes up for with his ability to keep plays alive, fight for what’s given, and his knowledge of the game. The Texas offense routinely hummed with Ehlinger slinging it downfield, averaging 47.2 points per game in victories a season ago.

He averaged nearly 250 passing yards per game in those wins while chipping in another 240 yards on the ground. His ability to run the ball not only gave Texas a chance to win, but it also gave opposing defenses something else to think about as long as he was under center.

Ehlinger separates himself from the pack with his rushing ability. Rewind to the Red River Rivalry against Oklahoma a season ago. Despite dropping the game, Ehlinger found little success through the air and stepped his game up on the ground.

Against Oklahoma in 2020, Ehlinger carried the ball just 7 times but eclipsed 140 yards with 4 touchdowns. He single-handedly kept the Longhorns alive despite a defense that gave up 53 total points. Ehlinger and Texas knocked off Oklahoma in a similar fashion in 2018 when he ran for 3 touchdowns and 84 yards.

It can be said that the best players play their best in big games. While Ehlinger may not have found the most success in “team wins” in big games, he certainly gave it his all.

Over four career starts against Oklahoma, Ehlinger finished with a 1-3 record. Yet, he lost those three games by a combined 20 points. For his career against the Sooners, he completed 99 of 168 attempts (58.9%) for 1,086 yards, 5 touchdowns, and 2 interceptions. Additionally, Ehlinger ran for 10 total touchdowns against Oklahoma in his career.

He’s a big-game player with out-of-conference victories over Missouri, USC, Georgia, and Utah, to name a few.

Grit translates to the NFL

It’s hard to say he’ll quickly grasp the NFL game as the potential short-term solution to an injured Wentz for Indianapolis. But it’s incredibly easy to say that Ehlinger will grant fans a gutsy performance and give it his all when called upon.

It’s what he did in Texas. It’s what he’ll do in Indianapolis. And those are skills that are absolutely translatable.