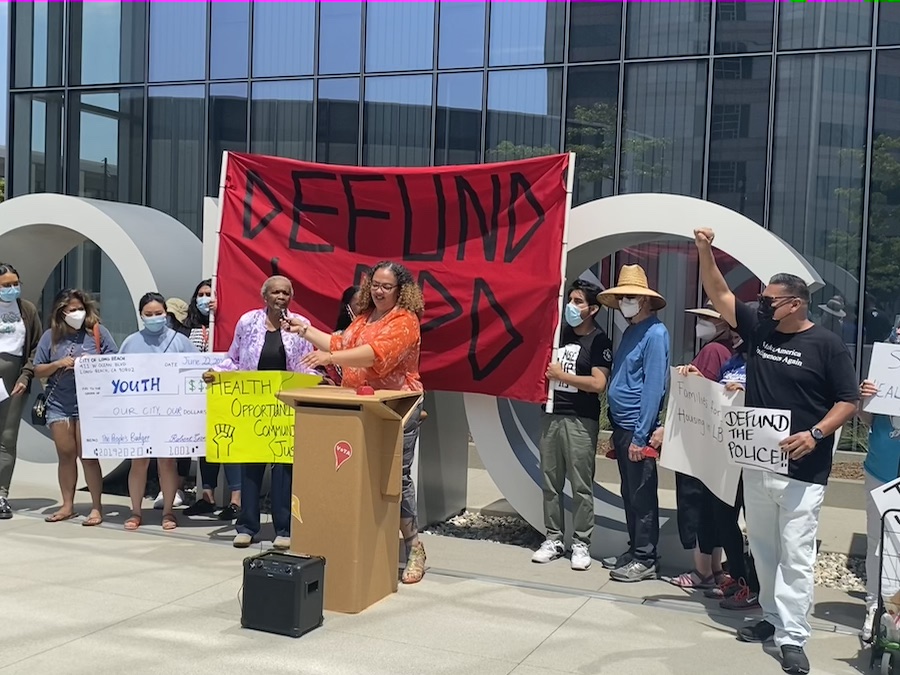 Organizers released the People’s Budget at a June 22 press conference calling on the city to invest in housing, a right to counsel for renters, new facilities for the city’s seniors and more money for translation services, among other demands.

To do that, a coalition of groups including Black Lives Matter Long Beach, Long Beach Forward, Long Beach Immigrant Rights Coalition and Long Beach Residents Empowered, said the city should reinvest funds from the LBPD and put them into community-serving programs.

However, the city’s proposed budget for the upcoming fiscal year showed an increase of over $16 million in the police department’s budget from what the City Council approved last year. The City Council also approved another $5 million for a police-run safety plan at its meeting last week.

“We are all calling for a defunding of the police and that’s the opposite of what happened in this budget,” said Audrena Redmond, an organizer with Black Lives Matter Long Beach.

Black Lives Matter and Black Agency, both of which are part of a coalition that assembled the People’s Budget, called for a $65 million cut to the LBPD budget. The money would be used to create a community-led crisis response alternative to police as well as other community infrastructure.

The city is facing a steep reduction in spending in the coming years with an anticipated shortfall of $36 million expected next year. It used $30 million in federal money to avoid cuts this year and allocated another $46.7 million to end furloughs of city employees and to replenish reserves it used during the pandemic.

However,  a lot of that funding came from federal aid that likely won’t continue in the future. With the city looking at steep cuts next year, Gross said that every part of the budget will be evaluated.

Gross said that the police budget’s $16 million increase won’t result in increased staffing but reflects increases in benefits, previously negotiated raises and other increased costs that will maintain the current level of service from the department.

Even with attrition, police budgets don’t typically trend down, Gross said. Savings from retirements and other departures can lead to short-term savings that can be eaten up by overtime due to low-staffing levels and by police academies held to fill open positions in the department.

Gross said this year’s budget was designed to maintain services and that increasing other programs in the city’s general fund could have either forced others to be reduced, the $30 million shortfall would have increased. That the city was able to present a balanced budget that preserved services in the face of an ongoing pandemic was “incredible accomplishment,” Gross said.

Redmond said she was not surprised to see little change in the city’s budget even after a year in which civil unrest filled the streets of Long Beach in the wake of George Floyd’s murder and city officials pledged to address disparities through a reconciliation plan.

But organizers did believe that they had secured a foundation to build off of in the Long Beach Rescue Act that the City Council approved earlier this year, which allocated about $250 million in state and federal aid money to programs to assist businesses and neighborhoods recovering from the pandemic.

While the city is making its largest ever investment in language access this year by devoting $700,000 for things like translation services at public meetings, it is $2.7 million short of what organizers believe is the true cost of ensuring that residents who don’t speak English can engage with the city on a meaningful level.

“To say that they’re doing more than ever may be true but things are worse than ever,” said Susanne Browne, a lawyer with Legal Aid Foundation Los Angeles.

Browne’s office handles eviction cases and pushed for funding for land trusts, a rental housing division within city hall and right to counsel for tenants facing eviction but only secured a fraction of what they believe it will cost fund those programs. “It’s just dipping a toe in the ocean of what people need in terms of help,” Browne said of the $2.8 million the city set aside for those programs from the federal funding it received last year.

Of the 17 specific requests for funding made by organizers that totaled over $107 million, about $10.4 million was proposed in the city’s budget that was made public earlier this month. The bulk of the money was made available through aid money with less than a million coming from the city’s general fund.

“It was very hurtful to see that,” said Marlene Montanez, an associate director with Long Beach Forward. “It’s really hard not to feel disappointed because a lot of that money was won during last year’s budget and during the recovery money allocation process.”

Montanez was also critical of the speed in which the budget is expected to be approved. The budget is not legally required to be adopted until Oct. 1 but the City Council is scheduled to take its first vote to adopt the budget on Aug. 24.

“If they really want community engagement how do they expect that to happen?” Montanez said. “The sense is they’re trying to rush this process.”

Mayor Robert Garcia said last week that the budget adoption date had been moved up to August because the budget document was released a few weeks earlier than normal. Despite the city’s proposed budget not revealing the level of funding they hoped for community groups are not done fighting for their slice of the pie, said Gaby Hernandez, executive director of Long Beach Immigrants Rights Coalition.

Hernandez’s group was the only member of the People’s Budget coalition to get all of the funding it asked for when the city allocated $300,000 from both the general fund and federal aid to help pay for the Long Beach Justice Fund, which helps pay for the legal defense for residents facing eviction.

“Some of our demands are being met our but our one big demand hasn’t been met, which is defunding the police and reimagining public safety,” Hernandez said. “So we’ll continue to fight for that.”

People’s Budget calls for cuts to police to fund investments into youth, housing and communities of color