While hundreds of thousands of California households fell behind on rent during the pandemic, a state rent relief program has delivered assistance to only several thousand so far. Housing advocates have filed a complaint with the state, saying at least one reason for the low numbers should be clear: lack of access.

They say barriers for tenants with limited English skills, and tenants with disabilities, are contributing to the slower-than-expected pace of getting funds to the people who need them.

To receive funds, applicants log onto the portal run by the state’s housing department — a challenge for those with vision and mobility issues. While online applications are available in Asian languages, they have been translated from English using Google Translate, which can be unreliable.

For example, the Chinese translation for the “return” button read as “Go back to your country applicant.” 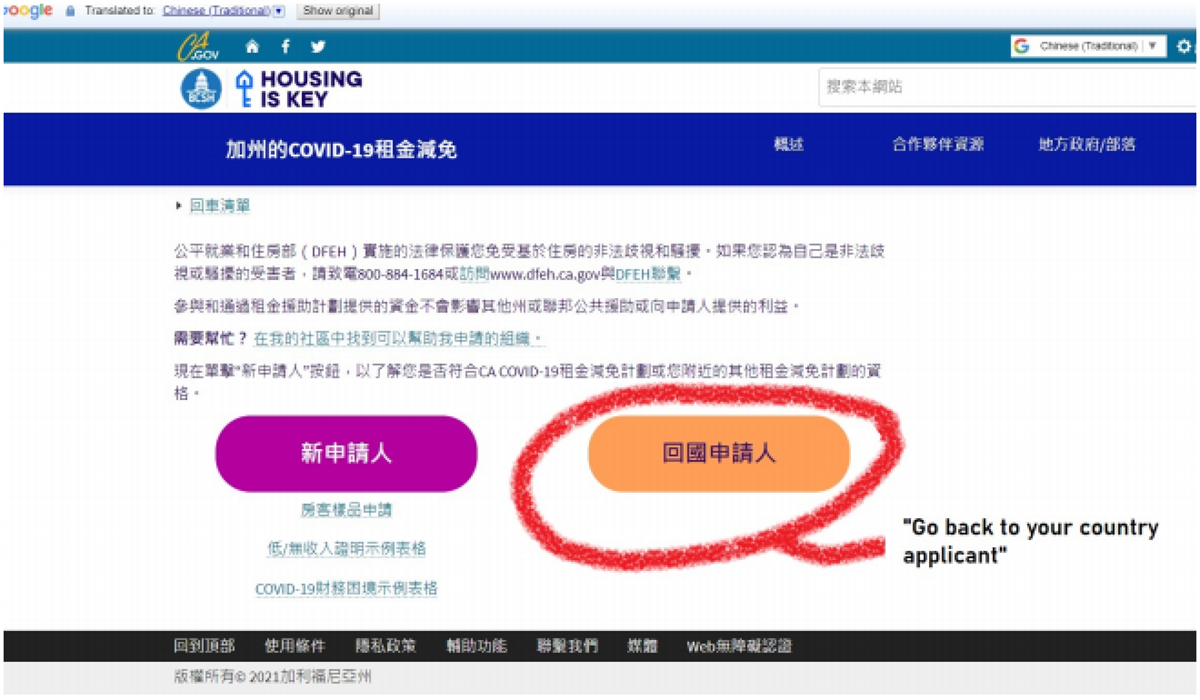 Housing advocates in San Francisco flagged the error in the spring for the Department of Housing and Community Development, which updated the English-language button, resulting in a more accurate translation, according to Asian Law Caucus spokesperson Niketa Kumar.

But Charles Evans, a supervising attorney with Asian Americans Advancing Justice in Los Angeles, said that the damage may have been done.

“Those are exactly the kind of problems that lead people to, at best, think the system is broken, and at worst, think that this program is not going to assist them and walk away before it’s done,” Evans said.

Amy Zhao, who oversees social service programs at the Chinatown Service Center in Los Angeles, said she has been helping clients with limited English apply for state rental assistance. They assume that they can’t navigate the site on their own.

“Everything’s English first, Spanish second, and then everything comes after that,” Zhao said.

AAAJ-LA and the Asian Americans Advancing Justice-Asian Law Caucus are among the civil rights groups calling on the state’s Department of Fair Employment and Housing to investigate language and disability access issues at the housing department and to require fixes.

A May snapshot of applicant demographics showed that 82% of applicants listed English as a primary language, followed by Spanish (13%). Chinese was a distant third at just under 2%.

The complainants — which also include L.A.-based Bet Tzedek Legal Services — say that the state has a responsibility to get the online materials professionally translated.

In another example of a Google Translate fail with an Asian language, a web page supposed to be titled “Renters” in Vietnamese came out as “Landlords,” according to the complaint.

“These things need to either be translated by a person or at least be supervised by a person,” Evans of AAJA-LA said.

The groups say the state must also make the applications available in printable form and ensure phone assistance and the ability to apply over the phone.

Zhao of the Chinatown Service Center said many of those she is helping apply for rental assistance are over 60 and do not have desktop computers or Internet access at home and would not be able to fill out a rental relief application on their smartphones. Disability advocates cite similar concerns for their clients.

The state’s Department of Fair Employment and Housing had no comment; a department representative said the complaint was an open matter. The state’s housing department did not respond to requests for comment.

CapRadio provides a trusted source of news because of you.  As a nonprofit organization, donations from people like you sustain the journalism that allows us to discover stories that are important to our audience. If you believe in what we do and support our mission, please donate today.