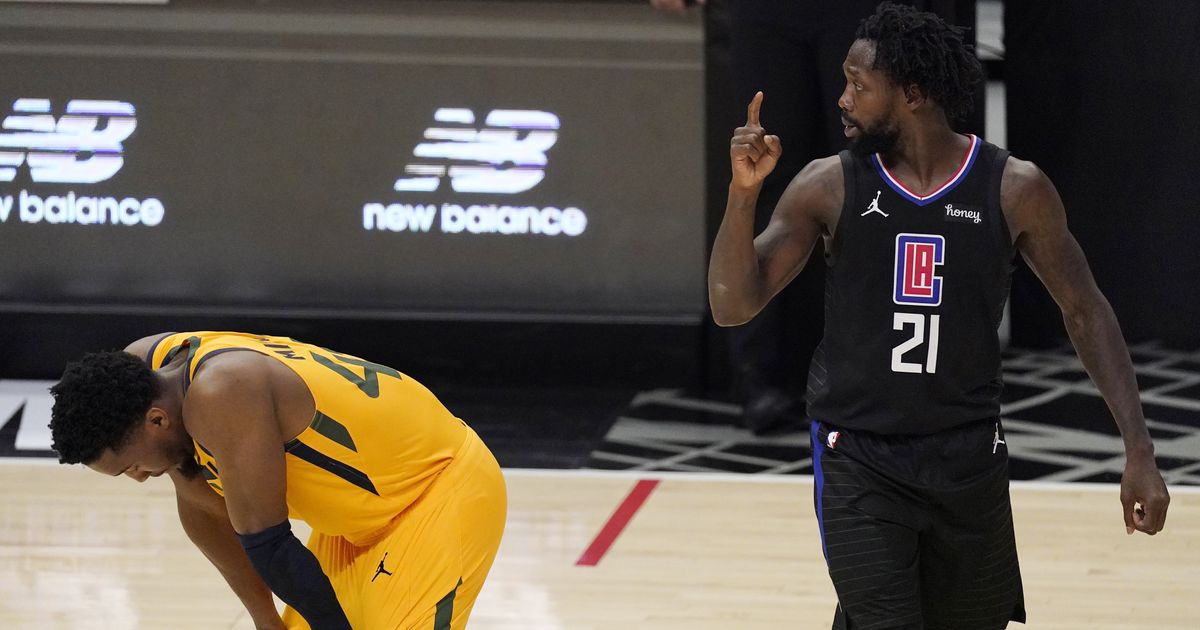 “The way we played in the second half … that’s who we are, that’s what we do. Even understanding we didn’t play a perfect half. So for us, being able to take that half, look at it, and go back home with that same energy I think is huge.”

That was Donovan Mitchell’s concluding postgame analysis in the aftermath of the Utah Jazz’s 118-104 Game 4 loss to the Clippers on Monday night in Los Angeles.

And he’s right. If the Jazz could bottle the essence of their second-half performance and take a sizable swig ahead of Games 5 and 6, they could start preparing for a Western Conference finals showdown with the Suns already.

So, what exactly changed from the awful start, and how do the Jazz replicate it?

Well, for starters, Clippers coach Ty Lue said before the game that he was sick of his team being “counterpunchers,” that he didn’t want to wait any longer for Utah to burst out of the gates with 8-0 or 10-2 leads, that his L.A. players needed to be the aggressors and set the tone early for a change. And they were and they did.

After Bojan Bogdanovic opened the proceedings with a dunk, it was the Clippers who scored the next 10 points on this occasion. The Jazz wound up trailing 30-13 after the first quarter, undone by 6-for-21 shooting, six turnovers, and a pair of early offensive rebounds allowed that both led to L.A. 3-pointers.

“Those plays are really deflating,” said Jazz coach Quin Snyder. “When you basically have gotten a stop and a team misses, and then you allow them to get another shot, usually those second shots are either around the rim or they end up being clean looks and usually from 3. And that’s what happened.”

Utah’s players, according to Bogdanovic, lacked the requisite urgency at the beginning of the game, but came out with plenty of it following the break.

Snyder, on Tuesday, agreed there was a subsequent shift in mentality.

“I think our mindset changed. Sometimes you realize the urgency and precision that you need to play with when the alternative doesn’t give you the results that you want,” he said. “… The other team adjusts, and you adjust on that, and pretty soon you get to a point where people have an idea of one another are doing, and then it comes down to competitiveness and force and execution and not allowing someone to take you out of something if it’s something that you know you need to do to be successful.”

Along those lines, it was particularly telling to Mitchell that more than half of the Jazz’s 11 total turnovers for the game came in that first quarter alone.

They had a good idea what Los Angeles intended to do defensively with Mitchell again juggling scorer and initiator roles — they just reacted poorly to it initially.

“I think we just panicked — well, I wouldn’t say panicked. We got into the lane, and those turnovers — I had one — were careless ones, where we’re not thinking,” Mitchell said. “We knew it was coming, we knew how they were gonna do it, but I think we shot ourselves in the foot a few times with turnovers, and that’s what really kind of played into that. Now they’re playing in transition as opposed to playing in halfcourt, and guys [were] getting in rhythm.”

As for the Jazz’s offense, it remains problematic that they never did generate any real transition opportunities, finishing with zero fast-break points.

At least, though, they started to loosen up the Clippers’ steel-trap halfcourt defense with improved ball movement. After totaling a mere five assists in the first half, Utah racked up 14 in the second.

“They came out really aggressive, and tried to force guys to play 1-on-1 and make tough plays in the first quarter, and they did a great job forcing us to take tough shots or [commit] turnovers. When we started to settle down a little bit, move the ball from side to side, use our bigs, it was a different game,” said Rudy Gobert. “And all of a sudden, we were getting to the line, we got 3s, dunks — and it’s the way we play, the way we played Game 1 and Game 2. And that’s Jazz basketball, that’s the way we want to play.”

There remain some areas they never really fixed Monday that need to be addressed — L.A.’s 10 offensive rebounds produced 18 second-chance points, and proved an impediment all game long.

“Kawhi started off with a second-chance 3. … Stuff like that gets guys going, all the way down to [Ivica] Zubac at the end getting a tip-out,” Mitchell said. “We just got to go out there and just execute in that sense.”

Meanwhile, several members of the Utah contingent pointed to Utah being whistled for 32 fouls to L.A.’s 24, and the resulting 38-26 discrepancy in free throws attempted. Three members of the Jazz’s starting lineup (Gobert, Mitchell, and Bogdanovic) had five fouls apiece Monday, while the other two (Royce O’Neale and Joe Ingles) each had four.

Rather than predictable criticism of inconsistent officiating, however, the real issue, in their eyes, was a demonstrable difference in the teams’ respective effort levels.

“They had 10 or 15 free throws more [than us], so that showed that they were the more aggressive team on the floor,” said Bogdanovic.

Snyder added that Tuesday’s film review would not only encompass the high points from the final 24 minutes, but that they’d also “look at things like giving a team 38 free throws, and the discipline that we have in that situation, and making sure we’re getting back, and not giving up offensive rebounds.

“Because it’s hard to overcome those things,” Snyder said. “You have to be perfect on the other end, and we weren’t that either.”

Ingles remarked Tuesday evening after that film session just how startling a contrast the two halves were.

“I don’t think we played necessarily on the back foot, but we got a bit stagnant. They loaded up the floor with their 6-9-across-the-board starting unit. And then, in the second half, we played the way we expect to play,” he said. “… We got stops, we were out running, getting shots in transition, getting on the rim in transition, making plays for each other, breaking the paint and starting that blender and having them in the rotation. So, yeah, it’s good to watch it and see how big a difference it was. And it’s obviously clear — for us, it’s the way we need to play.”