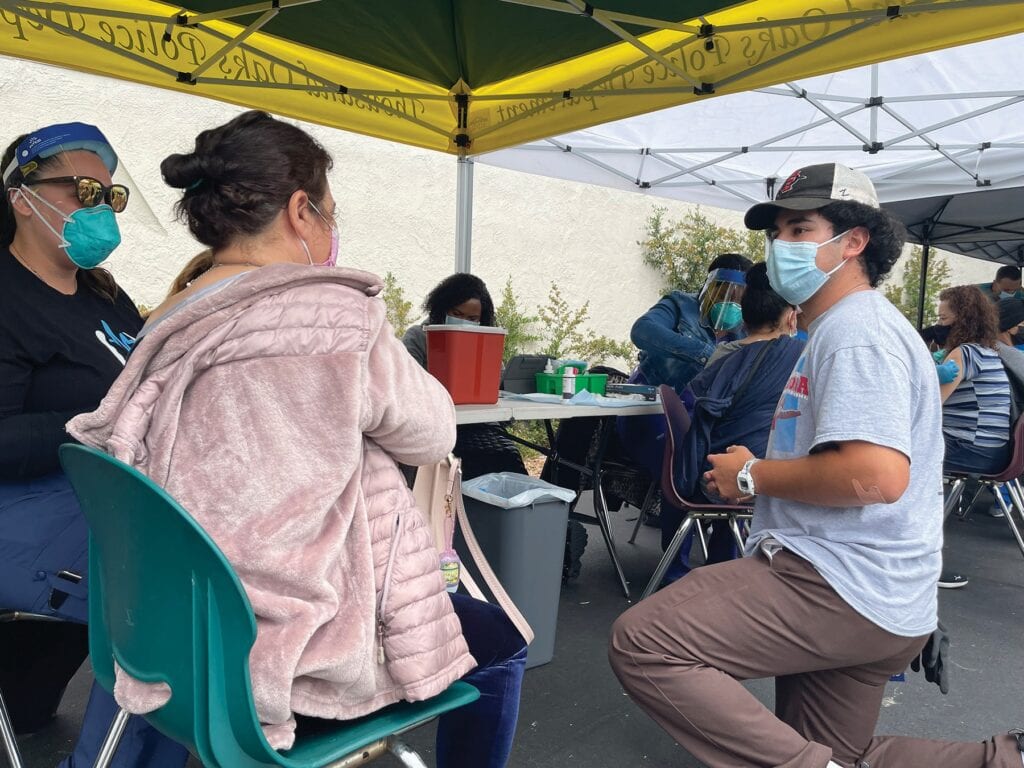 CONVEYING INFORMATION—Sebastian Pacheco, right, offers translation services during a May 15 vaccine clinic in the Las Casitas neighborhood of Newbury Park. The 19-year-old grew up on Warwick Avenue and now works for CRPD and Amazon. Photo by Dawn Megli/Acorn Newspapers

Sebastian Pacheco spent his childhood translating for his parents. Growing up in a Spanish speaking household on Warwick Avenue in Thousand Oaks, it was Pacheco’s duty when he was still in high school to translate medical paperwork, rental agreements and legal documents into simple Spanish terms so his mother and father could understand them.


Now 19, Pacheco is still translating, but not just for his parents. On May 15, he spent hours interpreting for vaccine seekers at a pop-up clinic in the underserved Las Casitas neighborhood of Newbury Park.

He greeted each vaccine recipient with “Buenos días” before he provided information and answered questions about the shots at what was the second vaccine clinic hosted by Safe Passage, a gang-deterrent program, in the low-income and heavily immigrant neighborhood north of the 101 Freeway. The first clinic took place April 24.

Between assisting patients, Pacheco told the Acorn he attended Safe Passage as a child and viewed his language assistance as a way to help the community he loves. Many of the vaccine recipients, some of whom arrived with small children in tow, are family friends.

“These types of neighborhoods often get overlooked. They feel like they’re not a priority, but they’re always grateful for everything they get,” he said. “A lot of the people here are moms I grew up with. It feels good because a lot of them are saying I’m turning out to be a positive person.”

Pacheco now works for CRPD in addition to a job working the graveyard shift at a local Amazon warehouse. While he has two jobs, not everyone in the two high-risk neighborhoods served by Safe Passage has been so lucky over the past year.

Julian Espinosa, founder of the nonprofit Leaving the Nest and a Safe Passage volunteer, said that after the pandemic triggered economic closures, there was an 80% unemployment rate in the neighborhoods served by the program.

Now that the economy is reopening, Espinosa said, it is vital to make sure that these workers are protected. The clinic did more than hand out vaccines. It also provided free groceries and hot meals from Chick-fil-A to those who attended. Espinosa said that during the pandemic Safe Passage has been focused on food security, COVID testing and rent relief to support families who otherwise would be vulnerable to the influences of gangs and drugs.

“This community is our farmworkers. They’re our maids, they’re our servers, they’re our gardeners, they’re our construction workers. It’s our truck drivers, it’s our trashmen,” he said. “It’s the blue-collar workers who make this city what it is. The city is as pretty and as nice as it is because we have them, day in and day out.”

While volunteers handed out food and administered vaccines, children rode bikes and scooters through the makeshift clinic. Some played soccer.

The Centers for Disease Control and Prevention recently approved the Pfizer vaccine for patients between the ages of 12 and 15. Socorro Alamilla, 15, and her sister, Rosa, 14, were among the first in that age category to get their first doses at the clinic.

Socorro, a Thousand Oaks High freshman, said her family has been very cautious regarding COVID prevention measures because her mother works in child care, so they missed out on celebrating Christmas with extended family members in Los Angeles during the height of the pandemic this winter. The girls’ vaccination opens the door to resuming family visits.

“This means we’re going to be OK,” Socorro told the Acorn.

Dina Rodriguez, who works in a cosmetics factory, said she’s happy her daughter, 12-year-old Sindy Juarez, is protected now. The best part, she said, was that the clinic was across from her house.

Chuck Huffer, a CRPD director, said watching volunteers hand out lifesaving vaccines under green shade structures with the CRPD logo on it was “just wonderful.”

“To be able to help a little bit is important and heartwarming,” he said.

While Pacheco was helping translate for people who were getting their shots, AmeriCorps volunteer and Cal Lutheran sophomore Martha Juarez helped check in families and tend to patients after their shots. The 19-year-old biochemistry major said that, like Pacheco, she always had to translate for her parents growing up, so this work was within her wheelhouse.

“Being here means I can help others from my community,” she said.

Pacheco’s work did not go unrewarded. The TOHS grad got his second dose of the COVID vaccine Saturday morning.

“I’ve got my card here,” he said. “My mom got her vaccine, too, so she said it’s pretty good that I’m just helping in a pandemic like this, that I’m not just sitting on the sidelines.”

Pacheco said he is grateful and proud to be bilingual because it means he can help give a voice to a community that otherwise wouldn’t be heard.