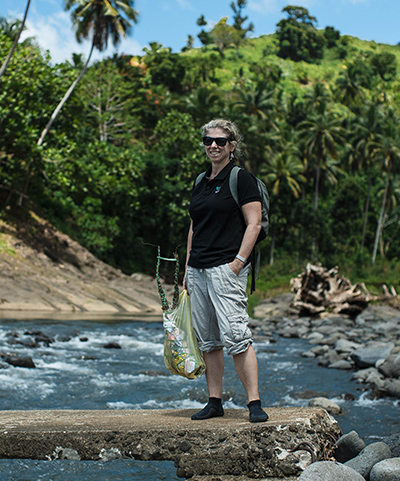 The Alumni Achievement Award ceremony, a virtual celebration of Jupiter and her work, will be Tuesday, May 25, from 5:30–7 p.m.

MacArthur “Genius Grant” recipient Stacy Jupiter (Ph.D. ’06, ecology and evolutionary biology), a rigorously trained scientist and coral reef ecologist, is happy to put on a sparkling disco shirt and dance in the streets in the name of conservation.

In 2009, she inspired an enthusiastic “flash mob” of 125 high-energy dancers in Fiji as part of a campaign to stop overfishing. In the name of resource conservation, she’s also co-developed comic books and put on puppet shows for children. She came up with the stories in partnership with local artist Tui Ledua, who wrote out the narratives for both.

Jupiter, a marine scientist with the Wildlife Conservation Society, is the recipient of a UC Santa Cruz Alumni Achievement Award, in recognition of her extraordinary commitment to studying development impacts and working to reconnect Melanesians with their natural heritage.

The campus will hold a virtual celebration of Jupiter and her work on Tuesday, May 25, from 5:30–7 p.m. During this live event, Jupiter will share her research adventures and her unusual but impactful approach to problem-solving and communication.

For Jupiter, this event will be a homecoming of sorts, even though she’ll be beaming in via Zoom from an island that lies 5,319 miles to the southwest of UC Santa Cruz, and is 19 hours ahead in terms of time zone.

Jupiter has been living in Fiji for the past 13 years, “but I feel like I never really left Santa Cruz,” she said. “I used to go back multiple times every year, and if I were to move back to anywhere in America, it would probably be Santa Cruz. It’s the place I feel most like myself, most at home.”

Her faculty adviser, Donald Potts, recognized her seriousness of purpose, combined with disarming people skills. Jupiter was equally comfortable playing with village children and having formal dialogues with government officials.

That skill set now comes to bear in Fiji, where Jupiter shows respect for local cultural practices, drawing from her field research and her conversations with islanders, to help residents protect the biodiversity of coastal ecosystems, while considering the human impacts of conservation.

For instance, Jupiter and her colleagues have shown the relationship between excessive development and devastating coastal floods, and how the floods give rise to typhoid outbreaks, linking the fate of humankind with the natural world.

“At the same time, resources have been commercialized everywhere so there is an erosion of the traditional stewardship,” Jupiter said. “With businesses trying to cash in on resources, there is an immediate need to revitalize age-old connections between the residents and their environment.”

She and her colleague Aaron Jenkins, a senior aquatic ecologist, have studied the impacts of human activity in watersheds and how that development affects downstream fisheries that are vital for food and culture. When she spoke about devastating impacts to local residents, including the effects of floods, a grown man in the audience began to weep.

“But even that was not enough [for local residents] to say no to the money coming in from logging companies,” she said.

The power of outreach

During her presentation for UC Santa Cruz, Jupiter will discuss her latest findings and outreach programs, as well as her evolution as a scientist who values outreach.

She started out wanting to be a marine biologist, learning how to do scientific writing, and watching how scientists presented material to lay audiences.

“If you look around the audience and see a lot of blank looks, you realize that this is great information, but if no one understands what you’re presenting, it doesn’t have an impact,” Jupiter said. “So how do you bridge that? How do you translate that into action? These days, my work is less focused on science and analysis and more focused on translating that work in ways that will inspire people to change behaviors.”