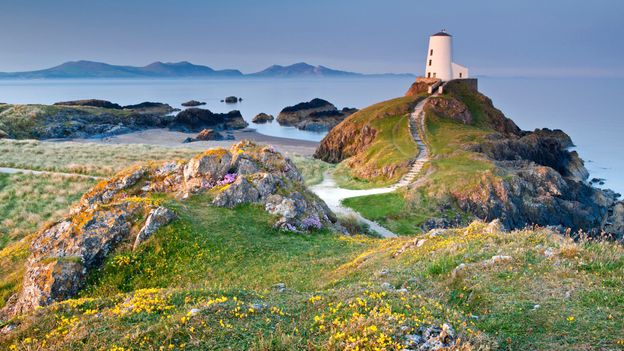 A small harbour I know well appears on an Instagram story, catching me by surprise with its flash of familiar cobbled streets and blue skies. It’s Wales: the land I grew up in and home to memories of afternoons spent fishing for crabs on that very harbourside in Porthmadog, long sand-dune walks along the north-west coastline and the inescapable smell of the sea.

Almost 6,000 miles away in Japan, my home for the past six years, the tide of recollections recedes, and I sit, a deep longing settling inside me. Childhood memories are entwined with echoes of a long lunch in a beautiful garden two summers ago, the last time I returned: wet grass beneath my feet and mountains in the distance. The pull on my heart is known in Welsh as hiraeth. Deeply connected but not tied to Wales itself, the feeling is a longing for something greater than a spot on a map.

Hiraeth is often likened to nostalgia in English or saudade in Portuguese, and it shares qualities with the German concept of sehnsucht, but none quite match exactly. It combines elements of homesickness, nostalgia and longing. Interlaced, however, is the subtle acknowledgment of an irretrievable loss – a unique blend of place, time and people that can never be recreated. This unreachable nature adds an element of grief, but somehow it is not entirely unwelcome.

“It’s a kind of longing for a person, a place or a time that you can’t get back to, a kind of unattainable longing,” explained Marian Brosschot, a Welsh language officer currently working in Trelew, Patagonia.

You may also be interested in:
• The truth about British stoicism
• The single word that connects Denmark
• Britain’s ancient, resurrected border

Formed from “hir”, meaning long, and “aeth” meaning sorrow or grief, hiraeth’s literal translation offers some insight but fails to convey the term’s complex nuance. “Hiraeth is one of these terms that’s impossible to translate because it has so many cultural overtones,” said Sioned Davies, professor emeritus and previous chair of the School of Welsh at Cardiff University.

Often connected to a deep pain, the word appears in the earliest of Welsh records and has been a constant weight for poets throughout the ages. In the early Welsh verses, known as Hen Penillion, an unknown poet pleads for the purpose of this “cruel hiraeth” that breaks his heart and wakes him in the night. Imbued with grief, it’s often seen as an ode to the loss of a homeland, a language or traditions – but could also serve as the key to their revival.

A vital period that cemented these losses was the dismantling of Welsh identity and subsequent revival of a heavily romanticised medieval Welsh culture in the 19th Century. Under attack from British rule, the Welsh were stigmatised following the publication of an education report in 1847 that soon came to be known as the Treason of the Blue Books. Denouncing the Welsh as immoral, ignorant and held back by an antiquated language, the report profoundly impacted not only England’s impression of Wales, but that of Wales itself for years to come. Following its publication, the Welsh were given a new, more palatable identity, proffered by the influential English poet, cultural critic and school inspector Matthew Arnold.

His characterisation of the “Celtic genius” was, specifically, “the British imperial concept of the sentimental, feminine, artistically gifted ‘Celt’ who is incapable of governing, thinking practically or conquering foreign lands,” explained Dr Marion Loeffler, reader of Welsh history at Cardiff University. Overall, she said, the Welsh were considered a civilisation that “while venerable, had long passed their zenith”.

Simultaneously dismantling an entire culture while glorifying a romanticised past, the British succeeded in replacing the Welsh identity with that of the melancholic, unprogressive Celt. Hiraeth for all they had lost, in an intensified form, was an inevitable response.

Seeking an opportunity to preserve their threatened culture and language, many joined the small but steady line of Welsh emigrants heading to the Americas, Australia, New Zealand and South Africa, among other destinations. While many enclaves were formed, one of the most distinct was Y Wladfa (Welsh for “The Colony”) in the Chubut region of Patagonia. The settlement was particularly unusual since it wasn’t driven by economic opportunity or to escape religious persecution; Y Wladfa was driven by a simple desire to preserve Welsh culture and language.

The significance of hiraeth to emigrants and the recognition of the things that might inspire it were recognised at the time, noted Bill Jones, professor of Welsh Modern History and specialist in Welsh emigration during the 19th Century. “While promoting emigration,” he said, “some 19th-Century Welsh emigrant guidebooks acknowledged that emigrants would experience hiraeth for Wales, their relatives and friends, and the landscape and ways of life of the localities they had left.”

This may go some way in explaining Wales’ high rate of “back migration”: the return of emigrants to their homeland. Between 1870 and 1914, approximately 40% of Welsh emigrants returned – a figure significantly higher than the rest of the UK.

Also far from home – and for many years unable to return – the Cardiff-based, Cameroon-born poet Eric Ngalle Charles offers an insight into the hearts of those who left the shores of Wales. Having experienced exile, the concept of an impossible longing for home was all too familiar ­– but finding himself in a country that understood such a feeling offered a distinct comfort.

“Hiraeth is the music you play constantly in your head hoping that you do not forget – it’s a place of comfort that you always return to,” he said.

Through poetry, he explores the meaning of hiraeth along with a similar word from his mother-tongue Bakweri – erzolirzoli – in a collection of poems from both small nations. Noting a rare but shared combination of language-loss and a deep love of mythical pasts between the lands, Charles believes the Welsh language and strong links to the past are key to the continued presence of hiraeth in contemporary Wales.

“Everywhere you go in Wales there are stories linked to the land,” agrees Davies, who specialises in the medieval Welsh tales known as the Mabinogi. From Llyn y Fan in the Brecon Beacons, which is home to the folklore legend of the Lady of the Lake, to the water demon of Llyn Barfog who plagued the town of Aberdyfi before being captured by King Arthur himself, there are few spots without a folktale to surround them, she said.

In Wales today, this connection, which fosters hiraeth, is seeing a revival with increasing numbers of people learning and speaking Welsh and storytelling festivals like Beyond the Border and its location-specific performances growing in popularity. Davies, who has advised on national curriculum changes as well as designing Mabinogi-inspired cocktails for Cardiff’s top bars, is confident the recent revival of folklore tales will have a lasting impact: “They help give a sense of identity and there’s an underlying moral code of conduct, if you like, which means they’re still relevant to life today.”

In the past, storytelling was one of the key elements taken across the seas to keep home close in the minds of travellers. The Y Wladfa community has long relied on the stories of ancestors who made the initial journey to continue traditions, and they continue to see hiraeth as a significant concept. A deeply insightful video project was started by the community in 2015 to record their personal tales of hiraeth and its influence over the years.

The roughly 5,000 Welsh speakers who live in Y Wladfa are by no means a majority, but they attend Welsh-language schools and classes taught by Brosschot and her colleagues and have successfully blended elements of Welsh and Argentinian culture to create a unique culture of their own.

“The community is very strong and close, they have a lot of events where they come together, a lot of eisteddfods [annual cultural festivals showcasing recitals, singing and poetry among a myriad of other creative talents], a lot of singing and dancing evenings – so in that sense it’s very rich,” Brosschot said.

In her home away from home, Brosschot notes that despite the distance, she feels closer to Wales here than on her travels in Europe. The smallness of the nation, its battles for recognition and the unique excitement at meeting a fellow Welsh abroad means that there’s a sense of pride to being Welsh, she said.

And she noted that when living abroad – especially with the added challenges of Covid-19 – hiraeth can be a help rather than a source of sadness. “It can be quite revealing, in a way. It can give you an idea of how you want to live, so you can try to embody that happiness and bring it with you into everyday life.”

While Wales is a place easily returned to, I know it’s not really the harbourside I crave or the beautiful views. What I miss is the unique sense of being home, perhaps in a way that – years later, with friends scattered and my family living elsewhere – is now unattainable, but nonetheless where I want to be. Considering Brosschot’s words, instead of focusing on the sadness of hiraeth, I phone the friend from the long lunch in the garden, her familiar voice and stories from home soothing the longing within.

Why We Are What We Are is a BBC Travel series examining the characteristics of a country and investigating whether they are true.

If you liked this story, sign up for the weekly bbc.com features newsletter called “The Essential List”. A handpicked selection of stories from BBC Future, Culture, Worklife and Travel, delivered to your inbox every Friday.