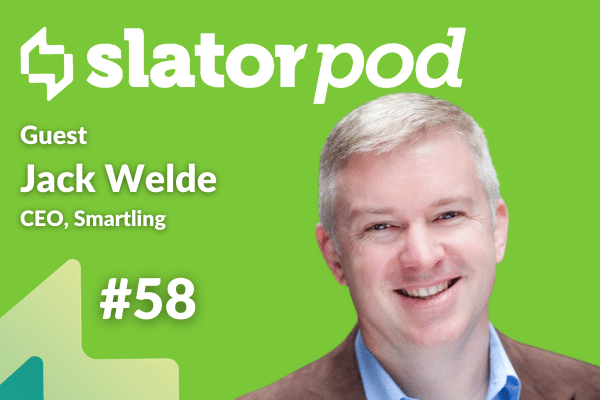 Smartling CEO Jack Welde joins us for SlatorPod #58 to talk about technology-enabled language services, scaling with fast-growing customers, the M&A and funding wave sweeping the translation management landscape, and much more.

Jack shares why Smartling’s attitude towards machine translation shifted from “MT bad” in 2010 to fully embracing the technology in creating their own NMT engines in 2020. He also talks about his experience of running a 200-person company through a laptop in the era of Covid-19, and steering Smartling through its best-ever year in 2020.

First up, Florian and Esther discuss the news of the week, leading with the breaking news that UK-based TMS provider XTM has sold a majority stake to California-based investors K1, after nearly two decades of bootstrapped growth.

Florian talks about another language industry investment story from the week, as Germany-based Lengoo announced they raised USD 20m in Series B funding based on an AI-agency investment thesis.

The two discuss the market for MT data services, as machine translation provider SYSTRAN launched its MT Model Studio, which allows people to enhance existing MT models with their own bilingual or monolingual data, using SYSTRAN’s tech to clean and prep the data. Users can then choose to publish their models for sale on SYSTRAN’s marketplace, or reserve the models for their own purposes. One of the data sellers on SYSTRAN’s marketplace is TAUS, which recently launched its own data marketplace.

Esther shares an update from Sweden-based media localization company Plint, which appointed a new CEO in February 2021. Thomas Roberts comes from a product background and joins Plint as the company continues to develop its cloud-based Plint Core platform both for use internally and as a product licensed to customers.